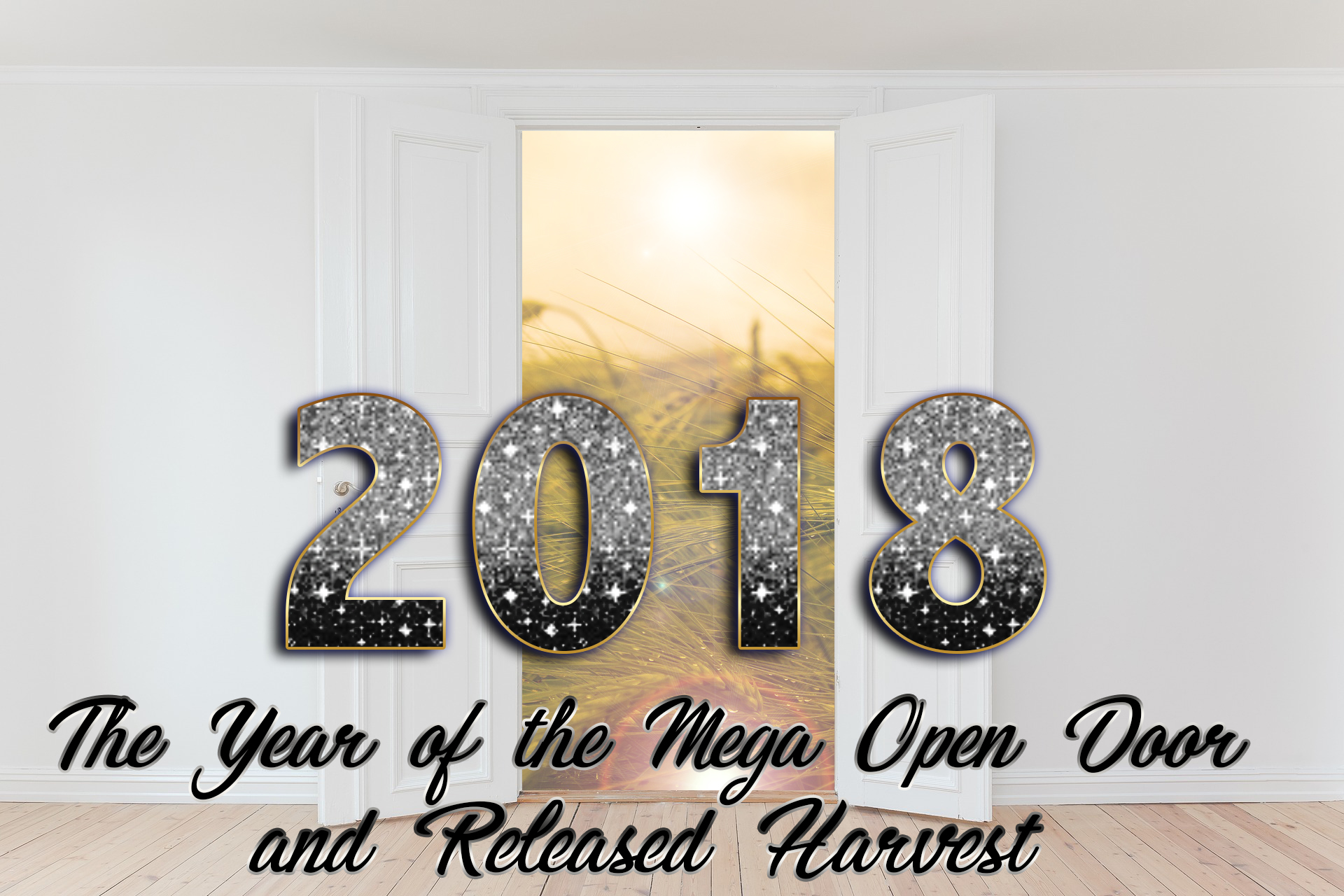 11 Jun The Year of Mega Open Doors and Released Harvest

Posted at 23:44h in Prophetic View by administrator 0 Comments
0 Likes

The year, 2017/ 5777 was the year of the sword. God prophetically declared that it would be a year of: separation, severing and cutting away fleshly entanglements which caused carnality and compromise. God spoke loudly about the three sevens to show us that he was intentional about finalizing, finishing and ending one Era to bring us into another Era filled with new possibilities.

2018, which is 5778 on the Jewish calendar, has ushered us into a New Era with Mega Doors of New Opportunities and brand-new possibilities. Eight is the number of New Beginnings. In Hebrew, the word Chet is the number eight, which means new life/ new beginnings. Eight is also the number that begins every ending. In other words, the ending of the beginning connects the number eight to our ending to begin again. It is 7 + 1=8 and is associated with resurrection and regeneration to symbolize a new order of things. We are not just starting over, but we have been reset and realigned in a New Paradigm. Behold all things will become new.

This year, expect newness everywhere as God upgrades our minds to a higher way of thinking so we may step into the favor God has extended. We have entered a time of accelerated blessings for the righteous. For the unrighteous, the judgements of God will move over the earth to take away the power, positions, influence and the wealth of the wicked (twisted, corrupt, perverted, unclean) people to transfer it into the hands of righteous people (those who do what is right according to God). God has ordered your enemies to become your footstool and they will hand you everything that is owed to you, that is due to you and what is coming to you.

We Have Entered Mega Doors

Doors are symbols of lateral transition, entrance, and access opportunity. God will bring us into Mega [meaning huge, large, colossal, gigantic, enormous] doors of opportunities. The Spirit of the Lord said, “doors and wells of provisions that were previously shut will be reopened supernaturally this year.” You will be faced with conquering the fears of letting go to step into these Mega Doors. As you step into the new doors and places you thought you would have never accessed your circle of influence will change by the minute. God wants us to be encouraged because, things we believed to have been forgotten by God will surely be remembered and yield us great gains and great rewards. Anticipate an outpouring of blessings to be released in this harvest season. The blessings of the Lord bring wealth without painful toil for it. Proverbs 10:8 NIV

Revelation 3:7 AMP
[7] “And to the angel (divine messenger) of the church in Philadelphia write: “These are the words of the Holy One, the True One, He who has the key [to the house] of David, He who opens and no one will [be able to] shut, and He who shuts and no one opens:

Old cycles and seasons of your past will not visit you again, because the Lord has drowned the enemies of your past in the sea of forgetfulness.

Malachi 3:10 AMP
[10] Bring all the tithes (the tenth) into the storehouse, so that there may be food in My house, and test Me now in this,” says the LORD of hosts, “if I will not open for you the windows of heaven and pour out for you [so great] a blessing until there is no more room to receive it.

I saw in the spirit the doors and windows of Heaven opened and blessings were pouring out with an infinite flow. It was as though the floodgates were open and there was no end to the release of resources from Heaven’s treasury vault. For those who are tithers and givers, God has earmarked a special blessing for them. It is a “poured out” [uncontained and overflowing] blessing unlike anything you have ever seen or experienced before. Likewise, we shall see wealth distributed into the hands of trusted seed sowers in the house of God. Everyone will not benefit nor partake of these blessings because a great separation has begun.

Revelation 4:1 AMP
[1] After this I looked, and behold, a door standing open in heaven! And the first voice which I had heard, like the sound of a [war] trumpet speaking with me, said, “Come up here, and I will show you what must take place after these things.”

The voice of God will be heard like never before in the marketplace and business arenas. The Lord is drawing many people out of dark places and into the Kingdom. Pay attention to those in Hollywood and the entertainment industry as many will cry out and ask, “what must I do to be saved?” They will truly have an experience with the revival fire of God’s glory wave. Also watch for new businesses, entrepreneurs, and kingdom thought leaders to be strategically positioned to manage God’s affairs and the mega wealth that has been released. God is speaking about the latter-day glory invading the earth and carrying its own harvest filled with heavens resources and wealth.

There will be ongoing battles, threats and the increase of rumors of wars. When this happens, look up and know that your Redeemer and Savior is soon to come. We will see global darkness increase. God often uses darkness as a backdrop or a display for the outpouring of His glory manifested through miracles, signs and wonders. It is one of His most brilliant ways to announce to His people that their time to shine has come.

Therefore, the Kingdom of God is making an announcement that the revelatory realms are open because without revelation we will not be able to continue in what God is saying. The Lord is demanding that we ascend and come up higher so that we won’t get deceived in these days of darkness. Worship will be the vehicle to take us higher to receive restoration for our souls and the advanced renewing of our minds to manifest fully as sons and daughters of God.